Some say that it’s boring watching people grow old, but just wait until you have to do it! This old bird does it with wit and charm.Inspired by the life of Jeanne Calment, documented to be the world’s oldest living person.
2F/2M 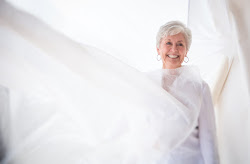 Writer/director/actor,professor: Lynn Wells Nelson has directed over a hundred productions from musicals to Shakespeare. She has adapted dozens of scripts in cooperation with Winston Weathers, Jack Matthews, Ray Bradbury, and others. As an actor, she has played such roles as Hedda in “Hedda Gabler” and Birdie in “The Little Foxes.”

THE ARTICULATE VOICE, her textbook, has been used throughout the country. She has dozens of published articles and conference papers to her credit.

A member of ASCAP;the Dramatists Guild of America; Orange County Playwrights' Alliance, having served as Board Member; New Play Exchange; and a former President of the Western States Communication Association. She is also a member of the Ocean Institute and Bowers Museum. Her leisure activities include sailing and golf.